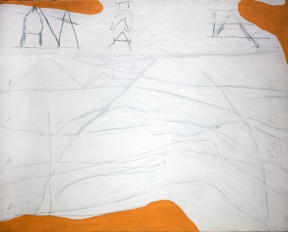 Private collection until the present

Biography
Gastone Novelli was born in Vienna on August 1, 1925. He received his classical education in Rome, where he had moved with his family, and became involved in the Resistance in 1943. He was arrested and then freed the following year. In 1945 he moved to Florence and earned a degree in political science. After the war he started painting and producing graphic works that were greatly influenced by the Neo-Constructivist theories of Max Bill, who he had met while staying in Zurich in 1947. In 1950 he moved to Brazil and devoted himself to the applied arts, teaching, and research into Geometrical Abstraction. In 1951 and 1953 he participated in the São Paulo Bienal. In December 1954 he went back to Rome and met Achille Perilli and Corrado Cagli; the following year he exhibited at the Galleria La Cassapanca and Studio B24.

In 1957 he took several trips to Paris and met the Surrealists Tristan Tzara, André Masson, Man Ray, and Hans Arp. He exhibited at Galleria La Salita in Rome and was clearly influenced by Art Informel. The same year, he created the magazine L’esperienza modernawith Perilli and started collaborating with poets and writers. Novelli was introduced to contemporary trends in American art by Cy Twombly, Willem de Kooning, and Robert Rauschenberg, who were active in Rome at the time. In 1959 he exhibited in the Galleria l’Ariete in Milan and participated in many groups shows in Italy and abroad. In 1960 he had a solo exhibition at the Galleria La Tartaruga in Rome and took part in the show Crackat the Galleria Il Canale in Venice. The following year he returned to Paris once again, where he met Beckett, Simon, Bataille, and Klossowski and had a private show at the Galerie du Fleuve.

In 1962 his work was shown at the Alan Gallery in New York and he spent some time travelling in Greece. Two years later an major exhibition of his work was presented at the Kunstverein of Friezeburg; he won the Premio Gollin at the Venice Biennale and created the magazine Grammatica with Manganelli, Giuliani, and Perilli. His first political work was produced in 1966, amid a climate of much protest and civil unrest. The following year he moved to Venice and published the comic book I viaggi di Breck. When invited to participate in the Venice Biennale in 1968, he refused to show his work and, as a form of protest, exhibited it face down against the walls. He died in Milan on December 22 of the same year.