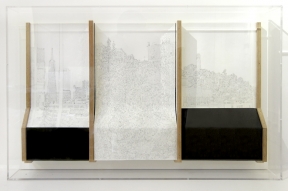 Richard Artschwager is an American painter and sculptor. Born in Washington D.C. in 1923, Artschwager moved to New Mexico with his family ten years later, where he became interested in art and science. After graduating from high school in 1941, he enrolled at Cornell University to study chemistry. World War II, however, interrupted Artschwager’s college career; he served in Europe from 1942-1946, including the Battle of the Bulge, during which he suffered a superficial wound. After being released from service, Artschwager returned to Cornell University and received his bachelor’s degree in 1948.

In 1949, Artschwager moved to New York where he studied art under the cubist painter Amédée Ozenfant until 1950. During this time, Artschwager supported himself with odd jobs, and was torn between art and other various trades, and eventually apprenticed to a cabinetmaker in 1953. Artschwager continued to produce furniture throughout the 1950s until a fire in his shop destroyed most of his inventory in 1958. This event was a catalyst that turned Artschwager once again back to art. His initial paintings were mainly abstract works derived from his childhood memories of the New Mexican landscape, and he had his first one-man show in New York in 1959.

Artschwager’s training in cabinetry stayed with him, however, and by the early 1960s he had developed the idea of creating sculptures that mimicked everyday objects such as chairs and tables. These first sculptures were typically wooden objets trouvés whose grain he would overpaint with acrylic to emphasis its pattern. As he continued to make such sculptures, however, they developed into more abstract, geometrical versions of these objects made from synthetic materials such as formica. Scholars view this shift as a response to both Minimalism and Pop Art, two prevalent veins of artistic production in the 1960s.

Despite his forays into sculpture, Artschwager continued to paint. From 1962 onwards, he produced gray monochrome pictures based on black-and-white photographs of modern buildings derived from property advertisements. These paintings would gradually become more complex, with a stronger attention to the play of light on the canvas.

In both his sculptures and his paintings, Artschwager explores the ambiguities of perception, particularly the differences and similarities between reality and artistic illusion.