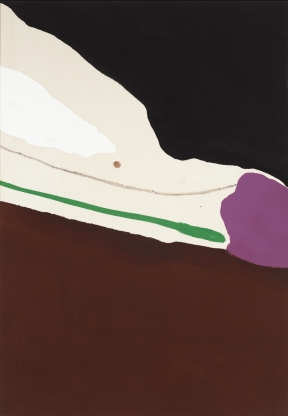 The best-known pioneer of stain painting, Helen Frankenthaler created translucent,
vibrant, fluid and color-saturated canvases that established her as a leader within the
New York School in the early 1950s. Much admired by the taste-making critic Clement
Greenberg, Frankenthaler’s experimentation with pouring and soaking her paint onto
unprimed canvas would influence the work of Morris Louis and Kenneth Noland.
Frankenthaler enjoyed a long and productive career and in 1969 received a
retrospective at the Whitney Museum of American Art. As scholar John Elderfield has
noted, this exhibition prompted the artist’s reflection on her own work as well as
commentary from the critics. Hilton Kramer concluded that while Frankenthaler made a
great contribution to abstract painting with the staining technique, “ the real interest of
her works lies elsewhere…in the quality of its expression rather than the technical
means by which that expression is realized.”