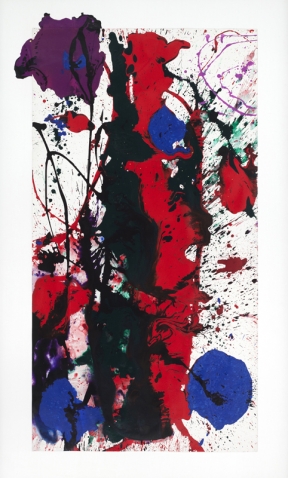 EXHIBITED
Sam Francis, Gallery Delaive, Amsterdam, April 1990, cat. No. 36
Sam Francis Now: 1989-1990, Kelvingrove Art Gallery & Museum, Glasgow; Talbot
Rive Gallery, University of Edinburgh, June - September 1990, Pl. 2
Sam Francis: The Unknown Works from the 1990's, Gallery Delaive, Amsterdam, 19
November - 23 December 2005
This work is accompanied by a Certificate of Authenticity from the Estate of Sam Francis
dated May 4, 1989.
Despite several attempts by art critics to classify his oeuvre, Sam Francis’s art has essentially defied categorization. Considered by some to be a second generation
Abstract Expressionist due to the drips, gestures, and splatters of paint in his work,
Francis has also been compared to Color Field artists due to the large, fluid sections of
paint that seem to extend beyond the confines of the pictorial surface. He combined both of these styles in his late career, producing large works whose expressionistic drips
and swirling pools of color push the boundaries of their supports, seemingly and
sometimes literally extending beyond the confines of the picture plane.
A work such as this one illustrates a darker period in Francis’ career. He lost two close
friends in 1988, and his heavy emotions surrounding their deaths manifest themselves
in his paintings. Curator William Agee has called the work produced in the period
between 1988 and 1990 “some of Francis’ best paintings, for he was working at a peak
of emotional intensity that he perhaps had never attained before.” (1) During these years
Francis “attacked his canvases … [with] some of the most powerful and intense color” of
his career. (2) The result, as seen here, combines high color with very physical, dynamic
lines, drips, and stains. The dominant central stain seems doubled, one light, one dark,
as if illustrating the constant, shadowy presence of loss. This doubling extends to the
round forms at top left and bottom right, which anchor the composition.
Francis was born in San Mateo, California, in 1923. He originally studied medicine and
psychology at the University of California at Berkeley before serving in the U.S. Air
Force. While confined to a hospital for several months due to a spinal injury, Francis
took up painting. After his release, he continued to study painting, first with David Parks
at the California School of Fine Arts in San Francisco and then later at U.C. Berkeley,
where he majored in art, eventually earning both a Bachelor’s and a Master’s of Art.
During this time, he began producing and exhibiting his earliest abstract paintings.
Despite the depth of his studies in California, it was his time in Paris during the 1950s
that would have the greatest impact on his work. Francis was initially influenced by the
work of the New York artists of the period, namely the Abstract Expressionists, and
incorporated many of their techniques and ideas in his work. Yet despite this influence,
in many ways Francis’s art was more in dialogue with modern and contemporary French
art. His references ranged from the Water Lilies of Claude Monet, which inspired many
of Francis’s ideas about atmosphere and space, to Pierre Bonnard and Henri Matisse,
whose conceptions of pure color were particularly resonant.
Francis went to Paris in 1950 and studied briefly at the Académie Fernand Léger. While
there, he became friendly with the Canadian artist Jean-Paul Riopelle and several
American artists, including Joan Mitchell, as well as more established European artists
including Alberto Giacometti. Francis quickly began exhibiting his work with a painting
included in the 1950 Salon de Mai in Paris and in several group shows, such as the
critic Michel Tapié’s celebrated 1951 exhibition, Un Art Autre, which was shown in both
Paris and London. By 1952, Francis was showing his work in several solo exhibitions
and high profile group exhibitions, such as the 1956 12 Americans exhibition at the
Museum of Modern Art and the 1958 New American Painting, both of which were
curated by Dorothy Miller, and the 1959 exhibitions Documenta II and the Bienal de São
Paulo.
While in Paris, Francis became associated with the tâchistes. The artists in this group
(named after the French word, tâche, meaning a splash or stain) created a style based on gestural action painting that combined the expressive, painterly aesthetic that so
characterized the movement with a desire to highlight the beauty of the materials, as
opposed to portraying psychological or philosophical concerns.
In his works made after the mid-1950s, Francis increasingly employed large areas of
white, which in relation to the glowing jewel tones seem to represent an optical
investigation into the perception of light and color. In many ways, this concern with the
quality of light guided Francis from the very beginning of his career. When confined to
his hospital bed, when he initially began painting, he had been struck by the shifting
effects of light, colors, and shadows as they were projected onto the ceiling. Francis described his interest in light as being “not just the play of light, but the substance of
which light is made.” Francis’s depiction of the shifting effects of light and large patches
of pure, glowing color recall both the effects of stained-glass windows in Gothic
cathedrals and Paul Cézanne’s watercolors, in which he attempted to “draw with color.”
Francis’s frequent visits to Aix-en-Provence, the town in southern France where
Cézanne, mesmerized by the local light, created most of his mature works, reinforced a
connection between the projects of the two artists. In Francis’s later works, he
incorporated the light and colors of Southern California, where he lived almost
exclusively after 1961. In fact, during the ascendancy of Abstract Expressionism,
Francis lived in New York City only briefly, in 1959 and part of 1961. Francis passed
away in California in 1994.
1. William Agee. Sam Francis: Paintings 1947-1990. Los Angeles: The Museum of
Contemporary Art, Los Angeles, 1999. Exh. cat. p. 46.
2. Ibid. p. 46.