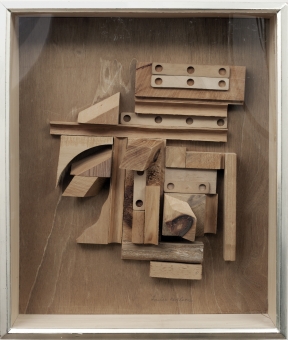 This wood collage from 1965 offers a fascinating glimpse into the course that Louise
Nevelson’s mature work would eventually take: highly complex, monochrome
assemblage box constructions. As this work demonstrates, Nevelson was always
fascinated with raw materials, particularly with wood (perhaps a lingering influence
inherited from her father, who worked at a lumberyard), and would remain a key element
in her work throughout her career. For her box assemblages, Nevelson would use
scrap pieces from furniture and other objects that she collected on walks in her New
York City neighborhood; it appears that the artist did something similar for the elements
of this early collage. Here, Nevelson has pasted several scrap pieces of wood in
varying shapes and thicknesses to a flat board, creating what is essentially a bas-relief.
The majority of the work’s components are focused in the center of the composition
around a block of dark wood. The varying shapes and sizes placed around this central
rectangle create a dynamic composition that plays with both dimensionality and geometry. As an early example from Nevelson’s oeuvre, this wood collage offers insight
into this artist’s unique creative development and process.
Acclaimed for her development of a unique sculptural vocabulary and process, Louise
Nevelson remained committed to innovation, experimentation, and her own personal
artistic style for over five decades. Working within the tradition of assemblage, she
crafted abstract three-dimensional boxes, walls, totems and environments, comprised
mostly of assembled found materials. The artist discovered her raw materials while
walking the streets of New York, drawing cast-off debris from curbsides, dumps, and
demolition sites. The found objects incorporated in her sculptures range from
architectural remnants such as chair legs and balusters to scrap construction pieces
revealing the ravages of tools and time. Nevelson unites the disparate elements—
remnants from our collective past and discarded memories—by painting her
constructions in a single color, usually black or white. The effect is one of the play of
shadows and the joys of subtle discoveries.
Nevelson was born in Kiev, Ukraine, in 1899, and her family immigrated to Rockland,
Maine, when she was two years old. When she was six years old, she found great
amusement in playing with wood scraps from her father’s lumberyard; this early
experimentation led her to announce, at the age of nine, her desire to become a
sculptor. After marrying Charles Nevelson in 1920, the artist settled in New York, where
she studied drama, voice, modern dance, and art. From 1929 to 1930, she took classes
at the Art Students League with Kenneth Hayes Miller. In 1931, she relocated to
Munich, to study under the legendary instructor Hans Hofmann.
Nevelson’s training encouraged her confidence, and after participating in several
important group shows, in 1941 the artist received her first solo exhibition, at Nierendorf
Gallery, New York. There she displayed an environment with overtones of a prehistoric
cave, an Egyptian tomb and a well-designed store window, conjuring a real or imagined
world or perhaps a vanished and unpopulated one. Five years later, she was included in
an important exhibition of American sculpture at the Whitney Museum. During this
period the sculptor’s star was ascendant, and her reputation was cemented in the
1950s. In particular, her 1959 exhibition of all-white sculptures, called Dawn’s Wedding
Feast, at the Museum of Modern Art, New York, drew critical acclaim, and the artist was
lauded for developing a new sculptural mode. In 1962, Nevelson represented the
United States at the prestigious Venice Biennale.
In the first decades of her career, Nevelson constructed all of her works. In 1960, she
began to have boxes made especially for her, rather than relying only on found ones.
These new boxes did not bear the signs of wear and use that her previous found crates
and boxes yielded—instead, they were sleek and flawless. In this way, Nevelson’s
newly constructed boxes reveal a dialogue with the minimal aesthetic of the mid-to-late
1960s.
In the 1960s and 1970s, Nevelson continued to work in her preferred color, black. Unlike
many other colors, black does not have specific connotations or evoke specific symbolic
associations; instead, according to the artist, it invites mystery, a quality that she values
in her sculpture. As the color of shadows, it also allows Nevelson to investigate certain
sculptural properties, such as space, relief, and light, in novel ways. As she once remarked, “I really deal with shadow and space….I identify with the shadow.”
During these decades, she also experimented with other colors and materials.
Incorporating gold, Plexiglas, and steel into her compositions allowed for greater range
of textures, scales, and visual effects. At the same time, she worked variously with
different sizes—crafting intimate table-top pieces as well as fulfilling commissions for
huge public works. Nevelson’s boxes, filled with reliefs, were sometimes even sealed
with a hidden form inside, generating a sense of mystery and discovery. These boxes
were displayed individually and also combined to form larger units, creating imposing
constructions on an architectural scale. She worked in series, creating numerous

iterations on a single theme before moving to a new one, often launching the next set of
sculptures in a different scale or material. In this way, there is a continuity in Nevelson’s
work from the 1950s onward, and yet she nonetheless continued to innovate until her
death in 1988.
Her work has been collected by public institutions and private individuals over the
course of her career and subsequently, and it appears in many of the world’s most
esteemed museums, including the Museum of Modern Art, New York; the Whitney
Museum of American Art; the Guggenheim Museum; the Museum of Fine Arts, Houston;
the Museum of Fine Arts, Boston; the San Francisco MoMA; the Detroit Institute of Arts;
the Israel Museum, Jerusalem; the National Galleries of Scotland; and the Tate Gallery,
London. Even more importantly, she has served as an inspiration and role model to a
generation of younger artists.