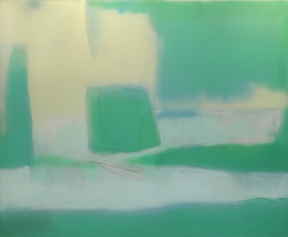 Born in 1903 in Turégano, Spain, to a family that appreciated the arts, Vicente was raised in Madrid. He recalled being “bored” during visits to the Prado as a child, but at age 18 he enrolled at Madrid’s Real Academia de Bellas Artes, where Salvador Dalí was a fellow student. After three years studying sculpture at the academy, Vicente turned his attention to painting. “I always made the heads too small anyway,”

During this period, the mid- and late 1920s, Vicente became fully immersed in Madrid’s cultural milieu, including the “Generation of ’27”, a group of poets, artists, and other intellectuals interested in the avant-garde. His circle included Luis Buñuel, and he met Pablo Picasso and Michael Sonnabend. After exhibiting for several years in Paris, Barcelona, and Madrid, Vicente moved to New York in 1936.

During his first decade in New York, Vicente exhibited at the Kleeman Galleries, the Bonestell Gallery, and the Pennsylvania Academy of the Fine Arts, and developed friendships with critic Walter Pach and painter Joseph Stella. By the late 1940s, Vicente was committed to exploring abstraction, giving up his earlier representational style of painting.

With extensive personal and professional connections and a commitment to pursuing avant-garde art, Vicente was centrally located in New York’s burgeoning postwar art scene. In the midst of the Abstract Expressionist movement, Vicente was a core member of the New York School, which included colleagues and friends Franz Kline, Jackson Pollock, Mark Rothko, and Barnett Newman. Vicente was a voting member of The Club, and shared a studio with Willem de Kooning.

The influential galleries and critics of Abstract Expressionsim recognized Vicente’s bold, gestural work as of central importance to the era. He showed with Charles Egan, Leo Castelli, and Andre Emmerich, among others; friends included Harold Rosenberg and Thomas Hess. Clement Greenberg and Meyer Schapiro included him in the Kootz Gallery’s “Talent 1950” exhibition, and Vicente participated in the seminal “Ninth Street” exhibition the following year.

From the 1960s on, Vicente refined his gestural style of painting and collage to reflect a more reductive approach that employed vibrant color harmonies and contrasts. He sought control and order in his work, rejecting the idea of the unconscious as an artistic guide, a notion embraced by some of his contemporaries. Instead, his carefully constructed mature compositions were evocative, dramatic, and nuanced. Thinly applied pigments and spare collage elements created works defined by light and structure. Vicente approached each artwork not as a single, discrete piece, but as a facet of his oeuvre: “any one of my paintings is part of a sequence, part of a total . . . . Each painting is solved in its own way, yet the continuation, the process, envelops all of them.”

Poet and critic John Ashbery described Vicente as “known and admired as one of the best teachers of painting in America.” Among his many teaching positions were jobs at Black Mountain College, the University of California at Berkeley and Los Angeles, Yale University, Princeton University, and Columbia University. His students included Dorothea Rockburne, Chuck Close, and Brice Marden.

Vicente continued to work and exhibited regularly well into his nineties. In 1991, King Juan Carlos and Queen Sofia awarded him the Gold Medal of Honor in the Fine Arts, Spain’s most important honor in the arts. Vicente died in Bridgehampton, New York, in 2001.