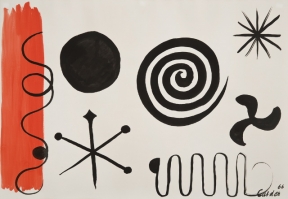 Alexander Calder was born the son of Stirling Calder, a sculptor, in 1898. Stirling Calder was a fairly successful artist, mostly known for his Statue of William Penn that sits atop Philadelphia's City Hall building. Calder, coming from a family of artists, would go on to begin sculpting at an early age and would become infatuated with moving parts at an equally early age. Alexander's parents moved around the country a good amount, mostly between California and New York City, but with every move they made sure that their living space had a suitable cellar space to act as young Calder's studio.

Alexander Calder Is an artist well known for the creation of his mobile statues. These statues are ones that are in someway suspended and involve movement, either via motor power or air current. Alternately, Calder is also well known for his stabile statues (ones which stand on the ground, as traditional statues do). Though Alexander's experimental statues are his claim to fame, he was a very prolific painter and created many pieces with the recurring themes of swirls and basic geometric figures that can be seen in Construction with Stripes. As Calder's sculptures began to evolve into abstraction, so did his paintings. The thin lines which used to be used to delineate form came to be used to delineate geometric shapes, many of which appear to be in movement. This path to abstraction is paved with a genuine interest in the physicality of motion.

"How can art be realized?

Out of volumes, motion, spaces bounded by the great space, the universe.

Out of different masses, tight, heavy, middling—indicated by variations of size or color—directional line—vectors which represent speeds, velocities, accelerations, forces, etc. . . .—these directions making between them meaningful angles, and senses, together defining one big conclusion or many.

Spaces, volumes, suggested by the smallest means in contrast to their mass, or even including them, juxtaposed, pierced by vectors, crossed by speeds.

Nothing at all of this is fixed.

Each element able to move, to stir, to oscillate, to come and go in its relationships with the other elements in its universe.

It must not be just a fleeting moment but a physical bond between the varying events in life.

Abstractions that are like nothing in life except in their manner of reacting." (1)

This quote from Abstraction-Création, Art Non Figuratif, no. 1, shows the manner in which Calder eternally related to the arts, and this view is one that seems to have been heavily influenced by his studies at the Stevens Institute of Technology in mechanical engineering. Calder sees the world (including the art world) as the sum of its parts. The aesthetic that he successfully builds up from this notion is one that is more interested with the way in which parts interact and react to make wholes, than the whole itself. Though made more blatant by his mobile works, this philosophy of aesthetics can be discerned from the canvases whose abstraction in the later years of Calder's life can be described as the separation of parts from whole, and the fascination with moving parts and their relation to the two dimensional depiction capable via painting.