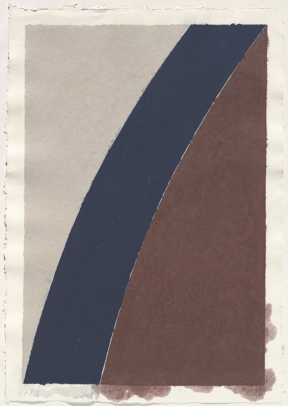 LITERATURE
Flint, Janet. New Ways with Paper. exh. cat. Washington D.C.: National Collection of
Fine Arts, Smithsonian Institution, 1977, cat. no. 22, p. 11.
Schiller, Marlene. 1977. "Footnotes: The Cover." American Artist. 41:21 (August), p. 6.
Richard H. Axsom, The Prints of Ellsworth Kelly: A Catalogue Raisonné, 1949-1985
(New York: Hudson Hills Press, 1987), p. 123, no. 152.
In 1976 Ellsworth Kelly returned to printmaking to create his Colored Paper Images, a series of 23 paper prints published by Kenneth Tyler of Tyler Graphics Ltd. This highly
experimental series embodies the basic tenets of Kelly’s work: geometric shapes,
curves, and arcs, and exuberant color. However, the new process allowed for chance to
enter into the work, which before this point had been characterized as carefully planned,
premeditated, and hard-edged.
Colored Paper Image XII, 1976, was created by ladling colored paper pulp into plastic
and metal forms shaped by Kelly. The molds would then be removed and the colored
pulp would be pressed into the wet handmade paper. The pressure of the press forces
the colors to bleed at the edge, creating unique variations within each edition. The
unpredictability of the materials is reflected in Kelly’s interest in introducing the
homemade paper pulp.
Ellsworth Kelly was born in 1923 in Newburgh, New York. Plagued with a childhood
illness, Kelly spent time with his grandmother who encouraged his interest in bird
watching, an early hobby that nurtured Kelly's initial passion for color.
From 1941 to 1943 Kelly attended Pratt Institute and lived on his own in Brooklyn, New
York. He was inducted into the Army in 1943 and eventually served in the Camouflage
Battalion, where he learned the process of silk-screening. A tour of duty took Kelly to
England, France, and Germany, and he was in one of the final waves on the landing
beaches in Normandy. After being discharged by the Army Kelly went on to study at the
Museum of Fine Arts Boston under Ture Bengtz and German Expressionist Karl Zerbe.
In 1948, Kelly exhibited in his first group show at the Boris Minski Gallery in Boston. His
work featured half-length portraits heavily influenced by Byzantine and Romaneque art
and by the work of Pablo Picasso. That same year, the artist returned to France to study
on the G.I. Bill at the Ecole des Beaux Arts where his artwork began to explore abstract
forms. In the late 1940s and early 1950s, Kelly experimented with all types of media
including collage, wood relief, and lithography. His first solo exhibition was held at the
Galerie Arnaud, Paris in 1951.
After returning to New York City in 1954, Kelly met David Herbert, Betty Parson’s
personal art advisor. This meeting resulted in Kelly’s first New York solo exhibition at
Betty Parson’s gallery in 1956. Kelly was invited to participate in the Young America
exhibition at the Whitney Museum of American Art in 1957, and the Whitney became the
fist museum to purchase one of Kelly’s paintings, Atlantic (1956). He became known in
the 1950s and 60s for his hardedge paintings, which were formal, impersonal
compositions painted in flat areas of color.
The Museum of Modern Art held a retrospective of Kelly’s work in 1973. During the 1970s the artist moved to Spencertown, New York, and rented space in an old movie
theater. This large space allowed Kelly to explore a grander scale in his work. He also
returned to making lithographs at Gemini G.E.L. in Los Angeles and then partnered with
Tyler Graphics in 1976 to create works from colored paper pulp.
In the 1980s Kelly began creating painted metal sculpture. The Dallas Museum of Art
commissioned him to create the large outdoor sculpture Curve XXIX. Like his more
modestly sized works, Kelly’s sculptures were meant to be viewed quickly and taken in
entirely with one glance. The viewer was to observe smooth, flat surfaces that are
distinct from the space that surrounds them.
Ellsworth Kelly’s individual approach and paintings of bold, yet simple, shapes
containing large blocks of color paved the way for Minimalism and Color Field Painting.