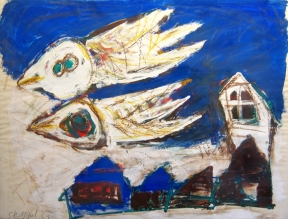 Birds over the Village


Christiaan Karel Appel, as has his full name was, was born in his parents' house at 7 Dapperstraat, Amsterdam. On the ground floor, his father, Jan Appel, had a barber shop. His mother, born Johanna Chevalier, was a descendant of French Huguenots. Karel Appel had three brothers.

At fourteen, Appel produced his first real painting, on canvas, a still life of a fruit basket. For his fifteenth birthday, his wealthy uncle Karel Chevalier gave him a paint set and an easel. An avid amateur painter himself, Chevalier gave his namesake some lessons in painting.

In 1946 his first solo show was held in Groningen, the Netherlands, and he participated in the Jonge Schilders exhibition at the Stedelijk Museum of Amsterdam. About this time Appel was influenced first by Pablo Picasso and Henri Matisse, then by Jean Dubuffet. In 1948 Karel Appel founded Nederlandse Experimentele Group together with among others Constant, Corneille and Eugene Brands, and later that year he was one of six who signed the manifest of the COBRA movement in Paris.

Beside his large production of paintings Karel Appel can add graphic works and illustrations, sculptures, ceramic works and large decorations of buildings and rooms. With his colors and childish lines Karel Appel seduces most of us, because we recognize the childhood and the fantasy in his pictures. His unspoiled motifs of children and animals in this period are depicted with strong and bright colors surrounded by sharp black outlines. While the motifs stands the way of expression are replaced in the beginning of the fifthties by a more freely and more emotional way. The quantities of paint too are used more unrestrained, and for a period he paints almost three-dimensional paintings.

Børge Birch, who was friend with Asger Jorn before COBRA, is introduced to Appel and they form a partnership which leads to several exhibitions - solo in 1949-71-83 and many mixed exhibitions alongside many of his COBRA- friends. Karel Appels work is exhibited in many gallerys in USA and all over Europe as well his work is represented in the finest museums in the world.

Dutch-born Karel Appel was part of the original CoBrA group (Copenhagen, Brussels, Amsterdam) whose works were characterized by bold expressionist forms and raw, intense colors. From 1940 to 1943 Appel studied at the Royal Academy of Fine Arts in Amsterdam. By 1951, when he painted a mural for the Stedelijk Museum in Amsterdam, he had earned an important place in the art world. His sculpture, paintings, and prints, thickly layered with color, have a childlike quality about them, but new possibilities present themselves at each viewing.

He was awarded the UNESCO Prize at the 27th International Biennale in Venice, and the first prize at the Guggenheim International Exhibition in New York in 1960. He has exhibited in galleries worldwide and is represented in the collections of major museums in the United States, Canada, England, France, and Holland.

He received the UNESCO Prize at the Venice Biennale of 1954

Graphics prize at the Ljubljana Biennial in Yugoslavia

International Prize for Painting at the São Paulo Bienal