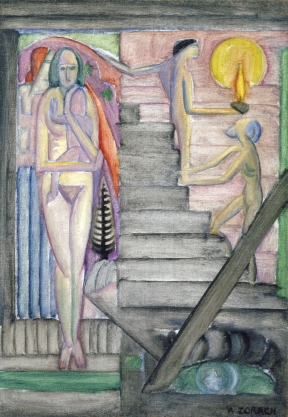 William Zorach, who became a modernist sculptor and master of the direct carving technique, began his artistic career as a painter. Born Zorach Samovich in Lithuania in 1889, he and his family immigrated to Cleveland, Ohio, when he was four years old. Encouraged by a teacher, Zorach enrolled in the Cleveland School of Art, where he studied painting and drawing. After working as an apprentice for a Cleveland lithography company, Zorach decided to pursue a career as a fine artist and left for New York in 1908 to study at the National Academy of Design.

Like many of his contemporaries, Zorach traveled to Paris in 1910 to continue his studies. While overseas, Zorach studied at the progressive art school Acadèmie de la Palette, where he met fellow artist and future wife Marguerite Thompson, a Californian. Referring to his two years abroad Zorach wrote, "I began to be conscious of the various modern influences that were invading the art world. . . I felt that I was a very young man entering a new age. The forces creating modern art seemed more alive to me than anything I had known or anything being done in America." (1) His time in Paris was formative, as he witnessed the revolutionary developments of Cubism and Fauvism. Zorach viewed Gertrude Stein’s renowned collection of French modernist painting, which included Cubist, Post-Impressionist and Fauvist masterworks and exhibited at several paintings at the 1911 Salon d’Automne. While at school in Paris he met Marguerite and after they married they retuned to New York, establishing their studio in Greenwich Village.

The natural world—vivid, ever changing and unbound by human dictates—was an important touchstone for William and Marguerite Zorach, both in their marriage and in their work. In his autobiography, Art Is My Life, Zorach wrote, "The country was a new world to me, every flower and every weed was a revelation of color and design. The richness of invention in nature was unbelievable." (2) Although the couple lived much of the time in New York City, they agreed before marrying in 1912 to spend warm-weather months in rural locations. In 1914, the Zorachs spent the second of two summers on a rented property in Chappaqua, New York. During the next decade, they also visited Provincetown, several places in New Hampshire and Yosemite National Park. In 1923, the couple purchased a small farm in Robinhood, Maine, which would become their permanent summer base.

At the end of his autobiography, Zorach proclaimed, “There are things one does for the pure love of form and color, in the easy abandonment to the moods and the fancies of the moment. These are my watercolors.” (3) In 1922 he stopped painting and focused exclusively on sculpture, a medium in which he was self-taught. After spending several summers in New Hampshire, in 1923 Zorach bought a farm in Maine for the family to use during the summer months.

Zorach launched his public career as a modernist by participating in the 1913 Armory Show shortly after returning from his transformative period of study in Paris. Beginning in 1927, by then a committed sculptor, Zorach regularly exhibited at Edith Halpert's Downtown Gallery. In 1929, he began teaching at the Art Students League and continued to do so for the next 30 years. By the 1930s Zorach had become a renowned American sculptor. Throughout his career he received several public commissions, including Spirit of Dance (1932) for Radio City Music Hall, Man and Work (1953) for the Mayo Clinic in Rochester Minnesota and Spirit of the Sea (1962) for Bath, Maine.