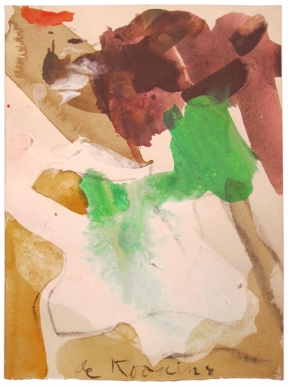 Willem de Kooning was a member of a group of artists that would come to be known as the New York School, some other artists included in this group were Arshile Gorky, Jackson Pollock, Lee Krasner, Hans Hofmann, Robert Motherwell, and de Kooning's own wife, Elaine. All of these artists were known for their style of abstract expressionism, or action painting. Though artsits like Jackson Pollock and Robert Motherwell move into the realm of complete abstraction for many or all of their works, there are some elements of de Kooning's work that harken back to the day of figure-ground representationalism. One of the most omnipresent elements of de Kooning's personal style of action painting played on this relationship between figure and ground.

Willem was known to construct his canvases with figures infront of overly complicated and layered backgrounds. these backgrounds allowed de Kooning to play with the dimensionality of his works, by over lapping figure with ground de Kooning was able to make the most complex canvases seem almost flat. Often times the line between figure and ground would be blurred by overlapping parts of the background, which had been created by layering different geometric shapes and brushstrokes over each other, with the figure, making any figure appear to be a part of the abstraction occurring all around it.

de Kooning will move into complete abstraction with his work as well, but this interest with the relationship of figure and ground will never lose its place in his work. As seen in the work to the left, Untitled (Woman), it has become apparent that de Kooning is interested in the abstraction's ability to communicate figure and ground. There is no discernable figure that can be called a woman in this piece, but there can be distinct layers of ground discerned from the explosion of color that is de Kooning's "Woman". There is a background effect created by the brown paint that covers most of the mid section of the paper, and then another layer of ground which is created by the color combination of the white green and purple colors. This second layer can possibly be read as the woman that the title implies, though in reality this seems to be nothing more than our brain laying the image of a woman's silhouette over the frame of overlapping grounds. This seems to be a notion that de Kooning is interested in exploring, that being precisely, the ability of abstraction to communicate both differing grounds and figure-ground relationship.