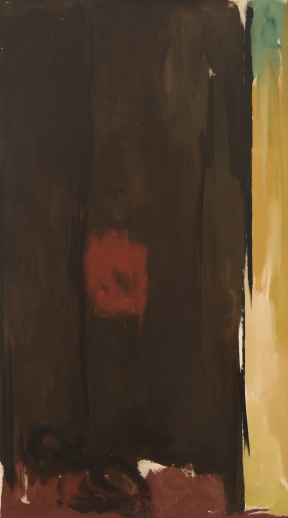 Theodoros Stamos is heralded as one of the few abstract painters who bridged the New York School’s first and second generations. His age, in particular, afforded him this unique position, as he was the youngest member of the “Irascibles,” the core group of fifteen New York School painters publicized by Nina Leen’s 1951 photograph in Life magazine. Like his New York School contemporaries, in particular his close friends Barnett Newman and Mark Rothko, Stamos continuously explored the workings of artistic form through color. Throughout his long career, Stamos has continued to be renowned as an abstract expressionist

Born in 1922 in New York to parents of Greek heritage, Stamos showed exceptional promise early in life. At thirteen years old, in 1936, he accepted a scholarship to the American Artists’ School in New York to study sculpture with Simon Kennedy and Joseph Konzal. He would later abandon sculpture in favor of painting, a medium in which he was largely self-taught. At the American Artists School he met Joseph Salmon who was a member of the politically engaged group of artists called “The Ten”, which included Adolph Gottlieb and Mark Rothko. Solmon encouraged Stamos to paint and to visit New York galleries, where he saw the paintings of Milton Avery, Arthur Dove, Marsden Hartley, John Marin and Paul Klee. He also visited the American Museum of Natural History and read texts on the natural sciences and translations Chinese and Japanese literature. His first paintings represented primitive Greek imagery and landscapes of the New Jersey Palisades.

Stamos was an active player in the New York avant-garde during the early years of Abstract Expressionism. His art attracted the attention not only of noted dealer Betty Parsons but also of museums and private collectors, among them the Museum of Modern Art, Peggy Guggenheim, and Edward R. Root, who began to acquire works by the artist. His work first caught the eye of Parsons, who organized his first solo exhibition at her Wakefield Gallery and Bookstore in 1943, when the artist was just twenty-one. Other commercial and critical success followed, and from 1943 to 1947, Stamos received three one-man shows and participated in several important group exhibitions, including the Whitney Museum’s annual and the important early show of Abstract Expressionist painting, “The Ideographic Picture,” which was curated by Barnett Newman at Betty Parsons Gallery. Stamos established lasting friendships with both Newman and Rothko, who shared with the younger artist an interest in primitive and mythological imagery.

A lover of travel, in 1947 Stamos traveled throughout the United States, visiting New Mexico, California, and the Northwest. In 1948 he sailed for Europe, visiting France, Italy, and Greece. In Paris he met many of the renowned modernists including Picasso, Brancusi and Giacometti. Always sensitive to the particularities of light, mood, and color of specific locales, Stamos's paintings are indexes of his responses to different places. Later in his career, he devoted several series of paintings to sites including Jerusalem, Delphi, and Lefkada, an island in the Ionian Sea.

Throughout his career, Stamos was also a dedicated teacher and held numerous positions. He taught at Hartley Settlement House for four years in the early 1950s, and at the progressive Black Mountain College, where he met Clement Greenberg and had Kenneth Noland as one of his students. In 1951, Stamos moved to East Marion, New York, where he developed an expressive color-field technique. In 1955, he began teaching at the Art Students League in New York, a position he would hold for twenty-two years. His prolific painting career continued in the 1990’s, when ACA Galleries, New York and the Municipal Art Gallery in Thessaloniki, Greece honored him with retrospective exhibitions. After a prolonged illness, Stamos died on February 2, 1997.