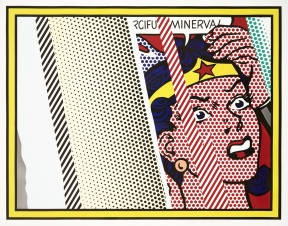 New York-born Pop artist Roy Lichtenstein took a different artistic path than the slightly older Abstract Expressionists, yet he shared with many of them an early interest in Cubism. While in the M.F.A. program at Ohio State University in the late 1940s, Lichtenstein sought to understand the progress of modern painting by copying famous masters’ works; for example, he created skillful renderings of Pablo Picasso’s Portrait of Gertrude Stein and George Braque’s Still Life with Pitcher. Lichtenstein completed his degree in 1949.

After several years of teaching at his alma mater, Lichtenstein moved to Cleveland in 1951. That year, he also mounted three solo exhibitions, the first at the Carlebach Gallery in New York. Lichtenstein relocated to New York after six years in Cleveland.

The insight that led to his Pop style occurred in 1961 when Lichtenstein realized that the visual devices popular-culture cartoonists used were very similar to those employed by Picasso and Klee, whom he had studied so intensively. Previously, Lichtenstein had reinterpreted source material using personal variations of Cubist or Constructivist techniques; he now drew from comic strips both subject matter and style.

In 1962, the year of his first solo exhibition at the Leo Castelli Gallery in New York, Lichtenstein made his first Pop prints. The technical inventiveness of his work as a printmaker, combined with his exquisite draftsmanship, contributed to his growing reputation. In the mid-1960s, Lichtenstein’s status as one of the foremost American artists of his time was cemented. He continued to paint, sculpt, and make prints in his hallmark style until his death in 1997.