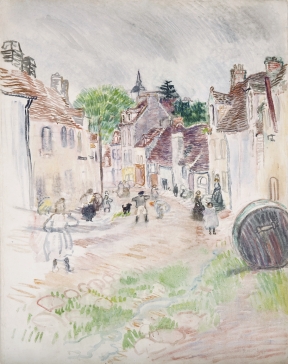 Raoul Dufy was a Fauvist painter that developed a colorful style which would lead him to be highly regarded as a building decorator and creator of both textile and ceramic patterns. Dufy was well known for his creation of canvases that depicted large scenes of outdoor social functions. He, like his fellow Fauvists, would use color not in a strictly representational sense, but in a more emotive one, creating scenes over embellished with color that linger in the realm of dissociated abstraction without fully straying from the representationalist approach to painting. Via this early 20th Century style, we come to works such as Village de Normandle, a work that utilizes color and loosely defined figure to illuminate a scene of social joy. in the bottom right portion of this canvas we can see how Dufy uses color in irregular ways, depicting what appears to be a large barrel as a mix between shades of green, red and black, a very unrealistic tone for the barrel to have, but a subtle one that illuminates that portion of the painting. Removing the limit of pure representationalism allows Dufy and the other Fauvists to create works that are intriguingly bright and active while depicting simple or mundane subject matter.