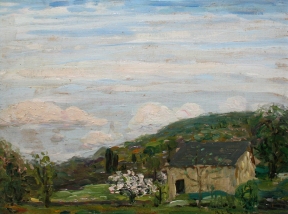 Leon Kroll painted for more than half a century, during which time he created striking works in several genres, from landscapes and cityscapes to still life and figure compositions and sensuous nudes. Born into a musical family in lower Manhattan, Kroll knew that he wanted to be an artist by age eleven. He began his art training as a student of the American Impressionist John Henry Twachtman at the Art Students League of New York in 1901 and continued his studies at the National Academy of Design from 1906 until 1908. With a National Academy scholarship, he traveled to Belgium, Holland and Germany before settling in Paris to work in the atelier of Jean-Paul Laurens for two years. While in Europe, Kroll absorbed the influences of French Barbizon painting, Impressionism and Post-Impressionism. He was particularly drawn to the work of Monet, Pissaro, Renoir, van Gogh and Cézanne.

Returning to New York in 1910, Kroll was given a one-man exhibition at the National Academy. He began to paint realist cityscapes that attracted the attention of George Bellows, who in turn introduced Kroll to Robert Henri and the painters in Henri's circle. Kroll became a close friend to several members of the group, especially George Bellows and Eugene Speicher. With them, he shared an interest in painting from life and capturing the rhythms of everyday existence.

Working with bold colors and vigorous brushwork, they depicted the back alleys, night clubs, and soot-filled streets of Manhattan. In the 1930s, these painters were dubbed “the Ashcan School.” Leon Kroll, who worked with a highly saturated color palette during this period, was among this group of artists, which also included Bellows, John Sloan, Everett Shinn, and George Luks, among others. These painters sought to capture the reality of the teeming life of the streets of New York City. Paint what you see, paint what you feel, Henri exhorted.

Throughout his career, Kroll maintained a balance between his academic training and his affiliation with the New York realists and other more progressive painters. He became a National Academician in 1927, and consistently showed work at the Pennsylvania Academy of the Fine Arts, Art Institute of Chicago and Carnegie International annuals, as well as at the National Academy of Design. He also participated in many independent exhibitions, including the famous Armory Show, and those at the MacDowell Club, the New York Society of Artists and the Society of Independent Artists.