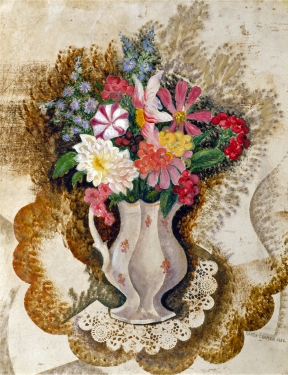 Born in Wurzburg, Germany, in 1888, Cramer studied art at the Karlsruhe Academy from 1906 to 1908 and with Ernest Schurth in the following year. He moved to Munich in 1910 and he began to see works by Europe’s foremost cubist painters, Pablo Picasso and Georges Braque. He lived in Munich in the months leading up to the emergence of the Blaue Reiter group and found inspiration in the work and ideas of Wassily Kandinsky, Franz Marc, and others. The Blaue Reiter artists felt one must break with tradition and paint from "inner necessity." They believed that realistic representation of the world was no longer the sole aim of art—instead, expression of one’s emotional responses to the world took precedence. These emotional qualities found expression in abstract forms and shapes and strong colors.

While still in Europe, Cramer met and married American art student Florence Ballin, with whom he immigrated to America in late 1911. The couple settled in Woodstock, New York, where they became integral figures in an already-thriving artist community. Cramer introduced non-objective European modernism to his fellow artists and was a founder of the Woodstock Art Association and the Woodstock School of Painting. The Cramers took up residence in Woodstock, where together with Rosie McGee, and Andrew Dasburg, Cramer formed an art gallery in McGee's boarding house which became the local meeting place of the art colony who adopted the motto: "Modern art or die!"

Many of Cramer’s paintings from his first decade in America are almost purely abstract—he began a pioneering series of non-objective paintings before the important Armory Show of 1913. Like Kandinsky, Cramer entitled some of his abstract paintings "Improvisations." In Kandinsky's system, the category "improvisation" specifically referred to "impressions of internal nature" with no direct reference to the observed world. (1) Eventually Cramer came to feel that he had taken non-objectivity in painting to an unsatisfying conclusion at which the image ceased to communicate with its viewer. Later in life he reflected, "When the point of contact with the beholder was lost entirely, the painting itself seemed to become sterile." (2) He pulled back from pure abstraction by the 1920s and began tempering recognizable subjects with a planar, cubist-inspired style. At this time, he began exploring “primitive” and folk art forms, which members of the Blaue Reiter circle had also shared a strong interest in.

The conservative tide which emerged after the First World War led such radical American artists as Thomas Hart Benton, Marsden Hartley and Dasburg to turn toward representation. Cramer, too, was affected and for the rest of his career he painted portraits and still lifes of the flowers he and his wife grew in their Woodstock garden. However, Cramer continued to express a partiality towards abstraction through commercial textile designs.

In the twenties he taught at the Woodstock School of Painting and the Dalton School for Girls in New York City. He was commissioned to paint a major mural for Dalton’s mathematics classroom which he executed in a highly abstracted form--very radical for a large scale work of that period. A longstanding friend of Alfred Stieglitz and frequent visitor at the "291" Gallery, Cramer shifted his focus from painting to photography in the 1930s. During this period, he worked as a professional photographer for the Works Progress Administration while pursuing his own modernist vision in photograms, photo-montages, and photographic studies of light in motion.