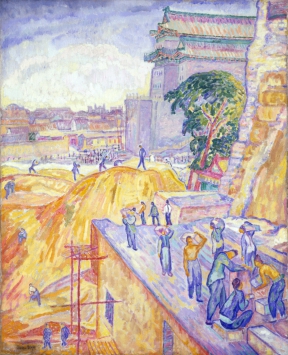 Jerome Blum responded to Fauvism by painting with electrifying color. He was instrumental in introducing Modernism to Chicago in 1911, a full two years before the Armory Show arrived there from New York.

Blum was born in Chicago on March 27, 1884 and studied at the Francis J. Smith Art Academy and the Art Institute of Chicago. In late 1906 he went to Paris, where he fraternized with fellow American artists John Marin, Alfred Maurer, Samuel Halpert--who became a mentor--and sculptor Jo Davidson. Blum exhibited at the Salons d'Automne of 1909 and 1910. In 1910 he returned to Chicago, and it was about that time that he met the writers Theodore Dreiser, Sherwood Anderson, and Ben Hecht, all of whom would remain friends for decades. An exhibition of his vibrantly colored paintings of France and Tunis at the W. Scott Thurber Gallery in Chicago in 1911 was controversial, but in the final analysis, well received.

For the next twenty-five years, Blum traveled frequently. He visited China, Cuba, Corsica, Tunisia, and the American West, and he lived in Paris and the south of France for several lengthy periods in the 1910s and 20s. In 1920 he embarked from San Francisco for the South Pacific. He lived in Tahiti for ten months, where, he wrote, he finally felt "freedom from the frictions of urban civilization." Like Gaugin, his search for vibrant, pulsating color was best satisfied in the South Pacific.

One-man shows of Blum‚'s paintings were held at the Katz Gallery in New York in 1911; the O'Brien Galleries of Chicago in 1915; the Anderson Galleries and Ainslee Galleries, both in New York, in 1929; and the Delphic Studios in New York in 1933. He was included in the Art Institute's annual exhibitions of work by Chicago area artists in 1912, 1914, and 1915 and was given a one-man show at the Art Club of Chicago in 1929. The summer of 1934, Blum was invited to be a fellow of the MacDowell art colony in Peterborough, New Hampshire.

In 1935 Blum suffered a mental breakdown cased by a severe case of typhoid-pneumonia and was ultimately confined to a mental hospital. Though he made frequent appeals to be released Blum remained institutionalized for the rest of his life and never painted again. He died at the Hudson River State Hospital in Poughkeepsie, New York, on July 23, 1956.