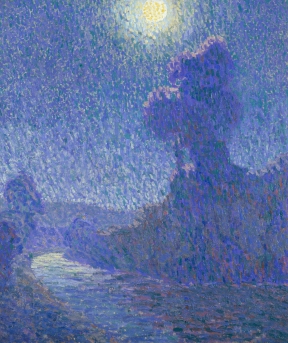 Hugh H. Breckenridge was born in Leesburg, Virginia, before moving to Philadelphia in 1887. During his lifetime Breckenridge will come to be known as one of the premier modernist artists of Philadelphia. After attending the Pennsylvania Institute for Fine Arts Breckenridge will go on to secure a scholarship that will allow him to fulfill his dream of studying abroad. While abroad, Hugh studies under William Bouguereau at Académie Julian, and it is here that he will find his passion for color and experimentation with color theory. After his first trip abroad, Breckenridge will begin to experiment with the Impressionist painting style which was running rampant in Europe. A Moonlit path is a great example of work from this period of Breckenridge's career, one that very clearly depicts his love for color and his inclination to experiment with it in his work. Upon his return to Europe, Breckenridge would further this pursuit of color theory by changing the style of his painting very often.

He once was quoted as saying “I see no reason why the painter should not have the same opportunity as the poet or musician to write one kind of verse today and another tomorrow...I don’t mean that [differnent styles of painting] are unrelated; they play always upon the same instrument--that of color and form as the result of color...” (1), this would come to define the career of Breckenridge, one that was riddled with fast paced changes of aesthetic style, all of which heavily experimented with the use of color.