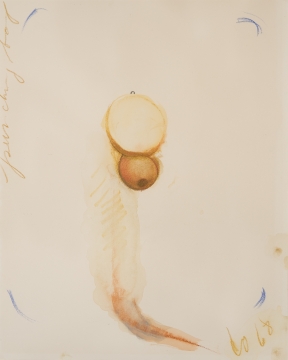 Claes Oldenburg was born in 1929 in Stockholm to a Swedish diplomat stationed in New York. His father was later moved to Chicago, where Claes would grow up, attending the Latin School of Chicago. Oldenburg would go on to receive his B.A. from Yale University, before returning to Chicago to take classes at the Art Institute of Chicago. Oldenburg is mostly known for his work in sculpture and especially his work with public space. He came to prominence during the rise of the Pop Art movement and was heavily involved in the Fluxus movement as well. Oldenburg created a series of "Happenings" which were performance pieces of the Fluxus period, he dubbed these "Happenings" his Ray Gun Theater.

Oldenburg became interested in the sculptural elements of found objects. Much like the ready mades of Duchamp, Claes found that anything he could discern a right angle from could also be seen as a ray gun. This sort of active imagination lead Claes to create shows like "The Street" in which found objects which contained right angles were hung in galleries and labeled ray guns. This would be the beginning of what people would call Oldenburgs aesthetic of trash. Not trash in that the work it self was garbage, but in that anything found on the street could be made into art when incorporated into proper scenario. This aesthetic of trash is what will inspire the Ray Gun Theater and many of Oldenburgs future sculptural pursuits.

Of the major public works that Oldenburg is noted for, they al pertain to everyday objects, usually super enlarged and often made of different materials than their real world counter parts. One great example of this was a large soft statue that he made of a tube of lipstick. This statue was inflated, and if a participant did not push a button to fill it up every so often, it would deflate. This is the kind of mundane public monument that Oldenburg would create throughout his career, and these aesthetic points of trash and common found object can be seen in the limited work of drawing and painting that Oldenburg would produce. This drawing of a punching bag perfectly embodies Oldenburg's obsession with found object. The image is not overly laden with artistic expertise, though it delves into the form of an object and questions the place of mundane object as the lone subject of academic art. This work loosely represents the object in question, though it guarantee's that It is a punching bag via the allotted title. Leaving empty space all around the punchingbag, the artist seems to bring the mundane object into conversation with the art world, bringing up questions like, what is the function of a punching bag when reduced to image? And, how does one seperate the mundane from the artistically interesting when Oldenburg views them as the same.

Oldenburg has had a revolutionary impact on the progression of art history via his overly conceptual works of art.