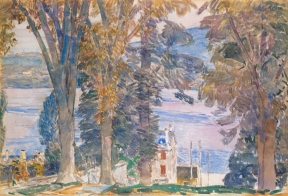 Childe Hassam was born in 1859 to fairly well established businessman and art collector Fredrick Hassam. Childe showed interest in the arts at a young age and took his first drawing classes while attending the Mather School in Massachusetts. His parents did not see the proficiency that Hassam showed in the arts, and he went on to drop out of High school after two years, even though his uncle had offered to pay for his Harvard education, in order to work and help support his family. Hassam's father then connected him with an entry level accounting job with the publishing company Little, Brown & Co. Childe became infatuated with the process of wood engraving and began to study the subject, he soon after found a job with wood engraver George Johnson. He excelled at his new wood engraving job and quickly proved to be an adept draftsman, he went on to create comercial engraving for letterheads and newspapers.

It wasn't until 1879 that Hassam created his first oil painting, though within the realm of painting, Childe would come to find that he much preferred working in water color over oil. in 1882 Hassam began to work as a free lance illustrator, or a black and white man as they called them in that time, and this is when he established his first studio. By 1883 Hassam was exhibiting his work and had his first public solo exhibition. The work of this exhibition was comprised of water color paintings that he had done in the recent years. After this Childe began to actively pursue more formal education in the arts. in 1886 Hassam and his wife, Kathleen, moved to France so that Hassam could study figure painting at the prestigious Academie Julian. Hassam left the school soon after starting there, finding that he preferred his own method of self teaching over the academy's overly academic routine which he found drilled the creativity out of people and dug them into rut's that they seldom found their way out of.

While in France Hassam began to adopt a more subtle pallet in his works, along with looser brushstrokes, a trend whose inspiration most likely derives from Childe's viewing of impressionist paintings hat he had viewed in museums and exhibitions, though he never met any of these artists. Childe soon became one of "The Ten" a group of impressionist painters. With the progression of his paintings being appreciated by the Boston critics that were seeing the works he was sending back home for sale, in order to sustain his life abroad, The end of Childe's career was bright and full of success. By 1909 he was selling paintings for up to 6,000 dollars a piece. One of Childe Hassam's paintings "The Avenue in the Rain" hangs in the oval office today.