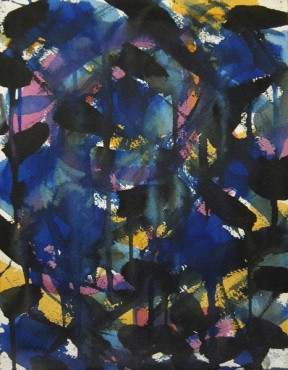 Norman Bluhm came of age during the rise of the second generation of abstract expressionist painters in America and, while influenced by his predecessors and his peers, he created a unique style that differed from that of those around him. Reacting against the predominant and popular style of the days—representational American Scene and Regionalist paintings of the 1930s and 1940s, and School of Paris abstraction—the first generation of Abstract Expressionists such as Jackson Pollock, Franz Kline, and Willem de Kooning sought to divest the work of art of any mimetic function. Art did not have to imitate or represent life; it was life unto itself. Accordingly, many also sought to rid their art of any narrative content: “The new painting dispensed with recognizable images from the known world . . .It was an art that sought to negate the art of America’s recent past as well as that of more distant times and places.”(1) Paintings became arenas in which to act—hence the term “action painters,” as an alternative to Abstract Expressionists. The physical act of painting was of paramount importance and must be apparent in the finished product. Their pictures were also places to display their physical, psychological, and emotional responses to the world around them.

Born in Chicago in 1921, Bluhm took a somewhat circuitous route to becoming an artist. He studied architecture at the Armour Institute of Technology (now the Illinois Institute of Technology) under Mies van der Rohe for three years before he enlisted in the United States Army Air Corps in 1941. Most scholars agree that his experience as a B-26 pilot during the war, flying missions over North Africa and Europe, had a profound effect upon his later career as a painter, in which he would incorporate the sense of space and the feeling of speed. After the war ended, Bluhm briefly returned to Chicago and in 1947, decided to devote himself to art. For a short time he studied at the Accademia di Belle Arte in Florence, but then settled in Paris from 1947-1956. There he attended both the Académie de la Grand Chaumière and the Ecole des Beaux Arts and came to know as Alberto Giacometti and other modern painters. In 1956, Bluhm moved to New York City and soon began showing his works at such renowned galleries as Leo Castelli and Martha Jackson in Manhattan and Galerie Stadler in Paris. From the late 1950s until his death in 1999, Bluhm exhibited regularly in group and solo shows throughout America and abroad.

As James Harithas wrote “the 1950s and 1960s gave rise to a powerful new generation of Abstract Expressionists. It consisted of artists such as Norman Bluhm, John Chamberlain, Al Leslie, Joan Mitchell, and Mark Di Suvero who approached the style with a profound commitment to take it to the next level. A sophisticated and sympathetic grasp of their European cultural roots and a greater emphasis on basics—composition, drawing, color, surface quality and structure—distinguish their approach.”(2)